By Halloween 2010 my dress-making ideas had come to a halt. I had no plans on what to be and couldn't for the life of me think of anything! Finally, while flipping through a colorfully illustrated book on the Greek Gods, I stopped on a page picturing Poseidon. At his side was the sea goddess Queen Amphitrite. That's it! I thought. Finally an idea! And so, the week before Halloween, I decided to be a sea goddess.
The base of the costume. 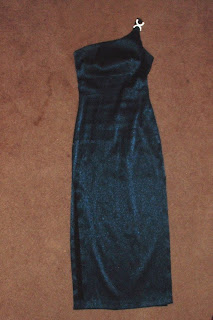 Here are the supplies used for this costume: A blue, fitted one-shoulder dress from Goodwill (bought for $4.50); blue sheer; a long, black skirt; seashells; plastic, fish tank seaweed; and a glue gun.
Step 1- The splits on either side of the base were opened to the hip.

Step 4- The black skirt was placed underneath the base and the sides were pulled up through the splits and sewn to the outside of the base.

Step 7- The leftover seaweed was used as accents to the hair.
The Final Product!!!
The back. 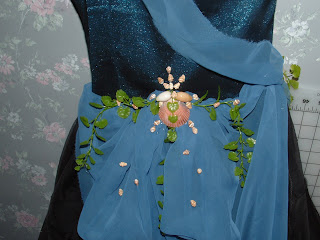 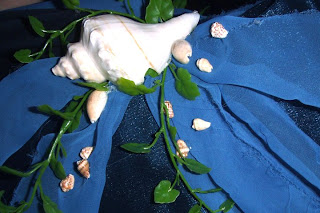 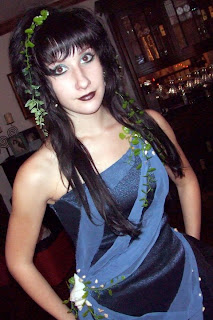 Not having nearly as much time to work on the costume this year, I had to get it finished over the weekend before Halloween. Therefore, all the steps taken to create this costume were done in two evenings. And although I managed to get it done in a lot less time than previous costumes, I think this one has been the most challenging.
Well, until my next costuming endeavor!
Sincerely,
Max
Posted by Maxine Thirteen at 11:47 AM 1 comment:

For Halloween I have been having a lot of trouble coming up with an idea for a costume. But finally, I came up with a plan. I decided to go for a sea-witch/sea goddess dress. And, as always, I started planning it out with sketches.
Here is the final sketch. I've already gotten a base and started work on the costume. More pics to come! 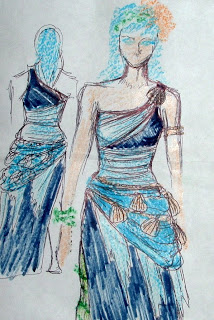